Cars from an Amtrak train lie spilled onto Interstate 5 below alongside smashed vehicles as some train cars remain on the tracks above in DuPont, Wash. Federal investigators say video aboard the train shows crews weren’t using personal electronic devices and that the engineer remarked about the speed six seconds before it went off the tracks south of Seattle.

A deadly derailment on the west coast of the United States this month underlines the need to have voice and video recorders in trains to improve safety on Canada’s rail lines, Transport Minister Marc Garneau says.

An Amtrak train derailed Dec. 18 in DuPont, Wash., killing three people and injuring dozens of others when it hurtled off an overpass and onto the highway below on its first trip.

Marc Garneau wants to see the video recorders on that train put on locomotives running in Canada and is also open to adding them to airplanes.

“I support anything that will help us to improve safety and improve our understanding of any accident that occurs,” said Garneau.

“There is, in my mind, still significant progress to be made with respect to rail safety and the same applies to all modes of transportation. The more information we have, the more important it is.”

Legislation before the Senate would, if passed, require companies to install recorders in locomotives similar to a black box on an airplane that could be used in accident investigations to determine what went wrong.

But Garneau is locked in a political battle with senators who want to make amendments or split the bill, known as C-49.

The legislation also lays the groundwork for an air passenger bill of rights and changes to grain shipping rules — issues that senators believe should be put into separate pieces of legislation. 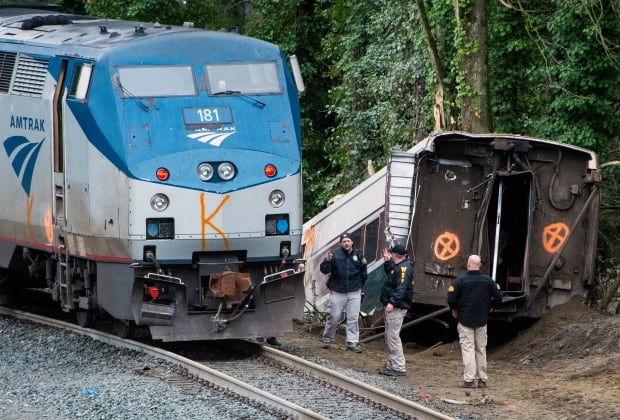 Emergency crews respond after an Amtrak train derailed Monday, Dec. 18, 2017, in DuPont, Wash. The Amtrak train making the first-ever run along a faster new route hurtled off the overpass Monday near Tacoma and spilled some of its cars onto the highway below, killing several people, authorities said. (Joshua Bessex/The News Tribune/AP)

Unifor, Teamsters Canada, which represents 12,000 rail workers, and the federal privacy commissioner have also raised concerns that the recording devices could be used for disciplinary reasons outside accident situations. There are also concerns about what happens to the data on the recorders when trains cross the border with the United States.

A regulatory process that could take up to a year once C-49 becomes law would set the rules about how the data is used, and set out punishments for violating the rules.

“We are very conscious of the element of privacy for employees and also the fact that this information should not ever be used for disciplinary purposes unless there’s an egregious act that is recorded,” said Garneau.

In the crash this month, the Amtrak train was going about 80 km/h over the recommended speed limit.

A speed control system aboard the locomotive, known as positive train control, didn’t operate as intended.

Nearly 100 people were forced off a Via Rail train this week near eastern Saskatchewan after mechanical problems, and Via Rail has now cited operational constraints in cancelling the Toronto-Vancouver train scheduled to depart on Tuesday.